You are here: Home1 / Resources2 / Ellipsometry Tutorial3 / Light and Materials

Two values are used to describe the optical properties which determine how light interacts with a material. They are generally represented as a complex number. The complex refractive index () consists of the index (n) and extinction coefficient (k):

Alternatively, the optical properties can be represented as the complex dielectric function:

with the following relation between conventions:

The index describes the phase velocity of light as it travels in a material compared to the speed of light in vacuum, c:

Light slows as it enters a material with higher index. Because the frequency of light waves remains constant, the wavelength will shorten. The extinction coefficient describes the loss of wave energy to the material. It is related to the absorption coefficient, , as:

Light loses intensity in an absorbing material according to Beer’s Law:

Thus, the extinction coefficient relates how quickly light vanishes in a material. These concepts are demonstrated in Figure 2 where a light wave travels through two different materials of varying properties before returning to the ambient. 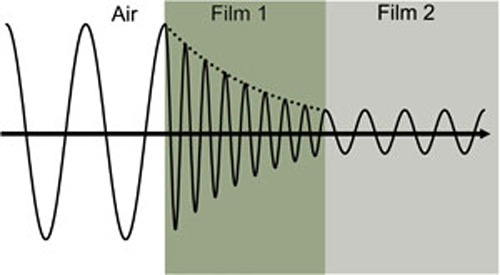 Wave travels from air into absorbing Film 1 and then transparent Film 2. The phase velocity and wavelength change in each material depending on index of refraction (Film 1: n=4, Film 2: n=2). 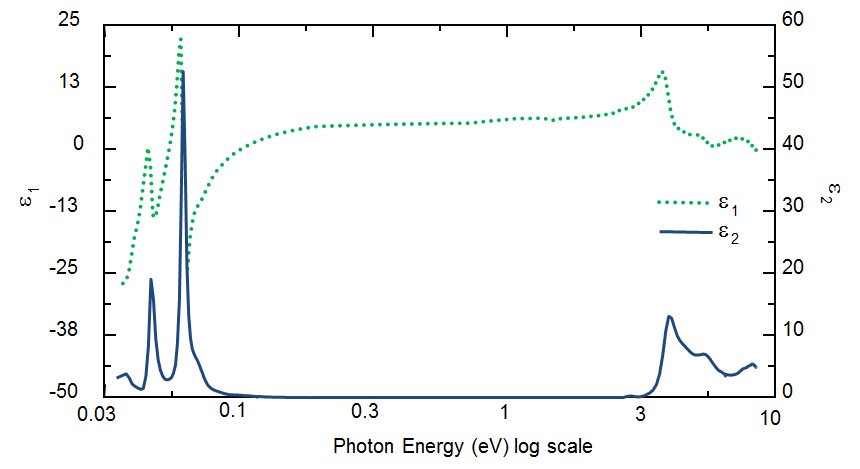 INTERACTION OF LIGHT AND MATERIALS