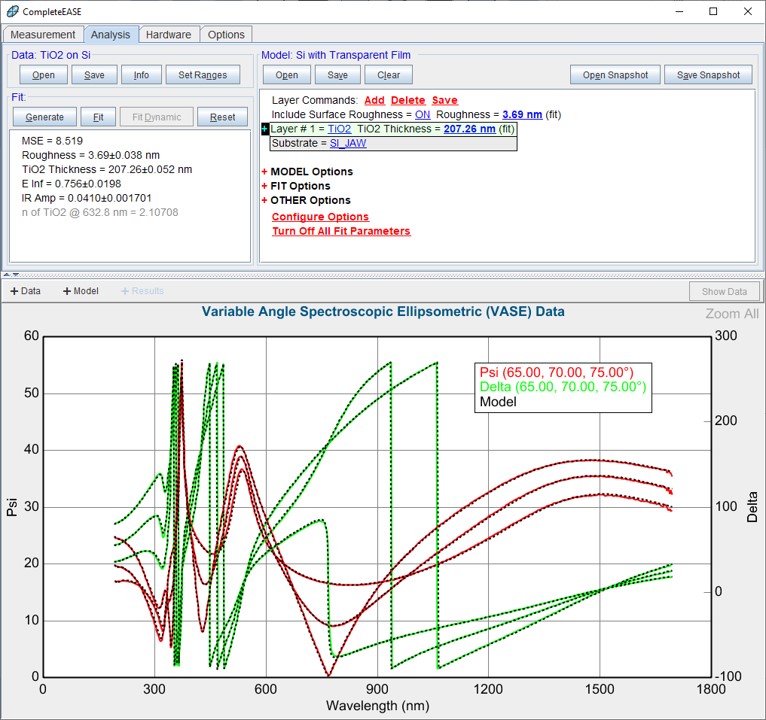 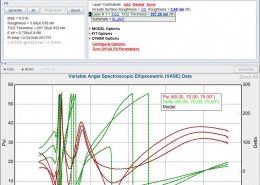 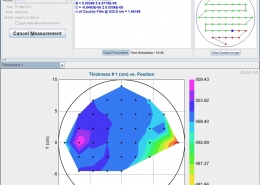 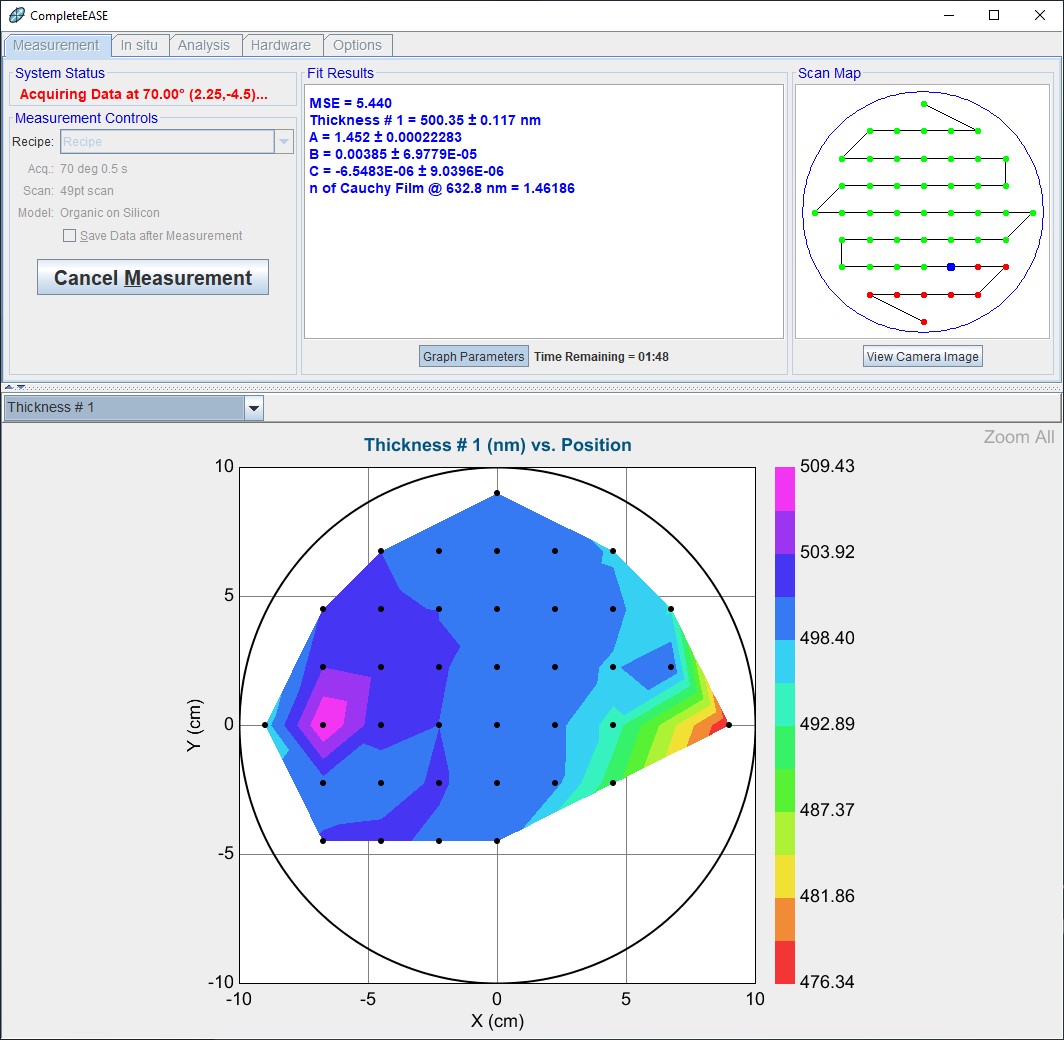 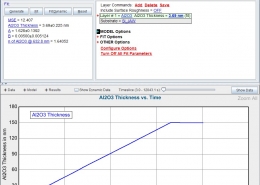 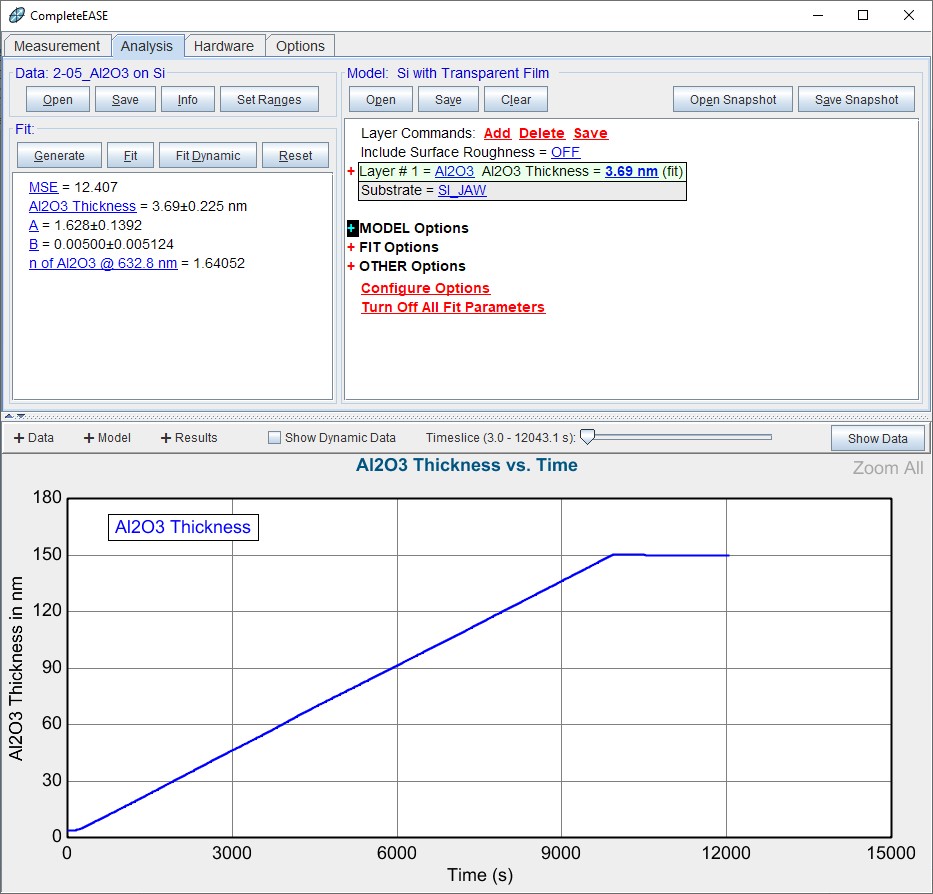 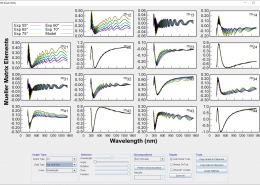 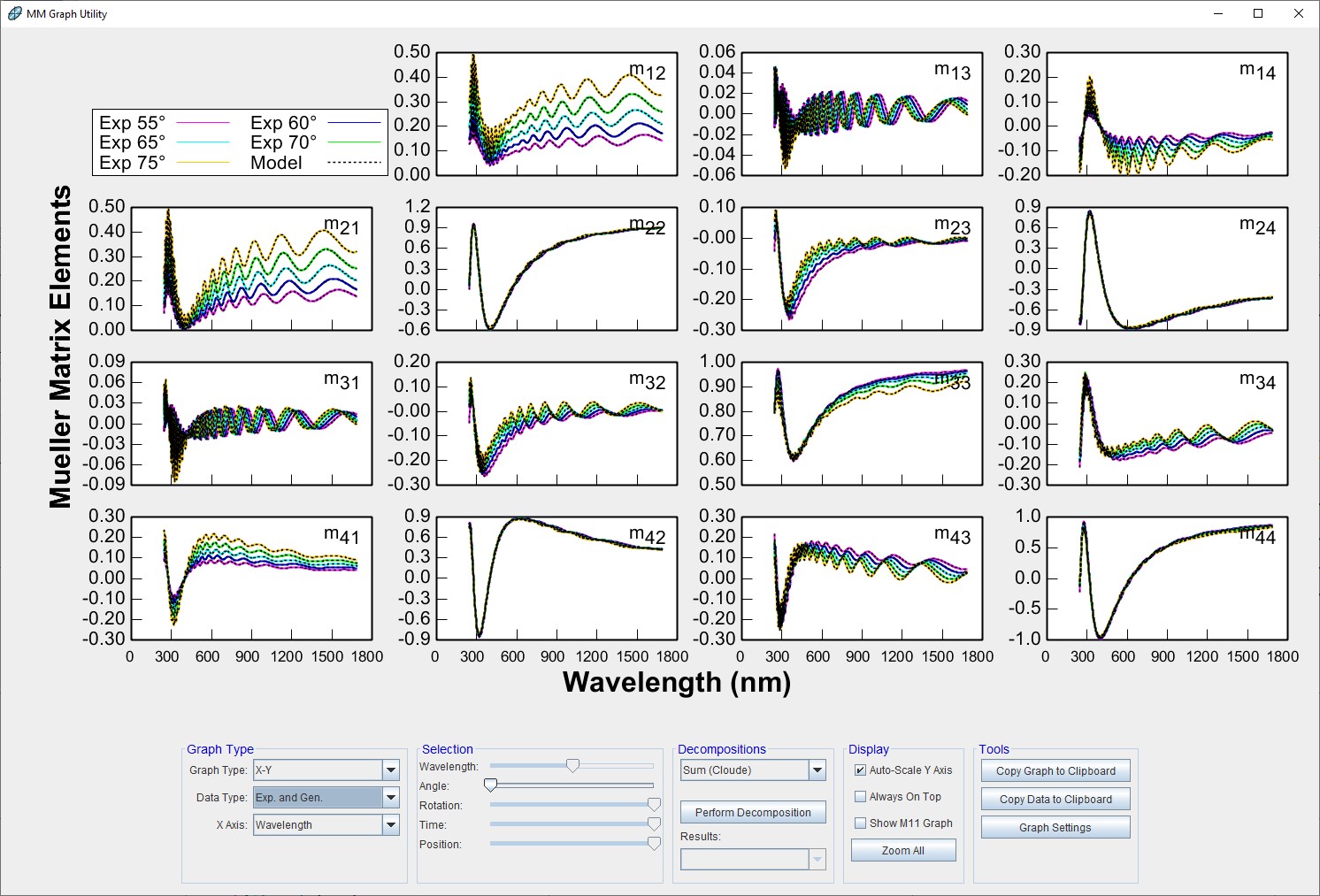 A comprehensive software platform for data acquisition and model development custom designed for use with J.A. Woollam ellipsometers, CompleteEASE provides the
most functional and intuitive interface for data analysis and reporting of results.

CompleteEASE features a variety of analysis tools to assist in model development. Our thickness pre-fit and global-fit algorithms automate thickness and refractive index determination for transparent films. We recently automated our patented B-Spline model to determine optical properties in absorbing regions with a single
mouse click.

The Levenberg-Marquardt regression algorithm has been optimized to provide the fastest possible model fit to raw data, including compatibility with multi-core processing. This is especially useful for the analysis of complex absorbing samples and real-time characterization of thin films where the data is analyzed as the measurements are acquired.

CompleteEASE is an all-inclusive software package to handle all your ellipsometry requirements. Conveniently measure the uniformity of your samples with automated sample mapping. Use spectroscopic ellipsometry to collect in-situ data on your process chamber or with accessories like our Environment Cell or temperature-control stages. All your data acquisition needs are combined into one easy-to-use software package.

Create your own recipes to collect data, automate mapping and analyze your samples – contained in one step.  Convenience and simplicity combine for push-button operation.

Combining scan patterns with pre-built models enables automated measurement and analysis with results reported in real time as the sample is measured. Once completed, statistics are provided, and contour plots enable easy visualization of the sample properties. 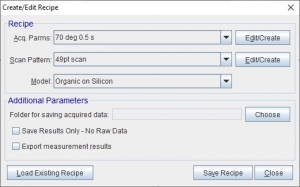 Ellipsometry takes advantage of the coherent nature of light to determine thickness of thin films. Light interacts with the various interfaces within the film stack and eventually recombines with the initial surface reflection causing constructive or destructive interference in the detected signal.

The CompleteEASE thickness pre-fit algorithm quickly estimates the film thickness for an unknown layer by leveraging the presence of interference oscillations in the raw measured data. This feature helps to avoid local minima in your fit by providing an automated starting value that is close to the optimized solution.

Global fitting is a feature used to search a defined parameter space for a global minimum. This approach is helpful to avoid local minima that might prevent the correct fit from being obtained. A standard global fit will scan two or more parameters as a grid. Each point gets assigned an MSE value, and the minimum MSE value along with its corresponding parameters is reported at the end.

CompleteEASE also features a randomized global fit algorithm, which will search the parameter space randomly instead of in a grid. The advantage of this method is that an MSE threshold can be set. Once a point below the MSE threshold has been found, the fit is then followed by a standard Levenberg- Marquardt fit. Tests have shown a reduction in global fit time of 5x or better using this feature.

Using the Alternate Models function in CompleteEASE is a huge time saver when testing your films for common complexities. In addition to surface roughness and grading, CompleteEASE can now check for simple anisotropy. CompleteEASE allows you to compare the results from each of these models, see which one CompleteEASE suggests as the best fit, and select which one you want based on the results. 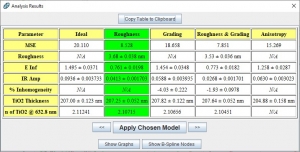 Absorptions in materials can be caused by electronic transitions, lattice vibrations, and free carrier absorptions, among other things. The nature of absorption resonances vary by material and are dependent on a variety of factors. For this reason, mathematical descriptions for absorbing materials are traditionally more complex. CompleteEASE features multiple tools for modeling absorbing films easily and efficiently.

The B-Spline layer was developed in CompleteEASE as an alternative to direct data inversion or oscillator models and has revolutionized optical modeling of semi-absorbing materials. The B-Spline has the following benefits:

The B-Spline is especially useful for describing complex dispersion shapes in a physical manner.

The latest versions of CompleteEASE feature an automated B-Spline feature which enables users to determine the optical properties of semi-absorbing materials with just a few clicks without the need of background information on the material or a reference file. 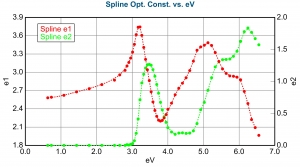 The General Oscillator layer, or Gen-Osc, was developed to simplify the modeling of material optical constants. The Gen-Osc layer models the dielectric function of a material as a linear summation of wavelength-dependent oscillators.

The oscillators described mathematically in the Gen-Osc layer represent the dipole response of the material and can be used to describe comparable physical parameters, such as band gap.

CompleteEASE provides a convenient Gen-Osc parameterization layer which helps to define the initial starting values of each oscillator in the model. Build your own oscillators using the parameterization window, beginning with a number of built-in functions, including: 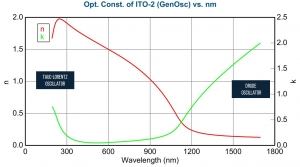 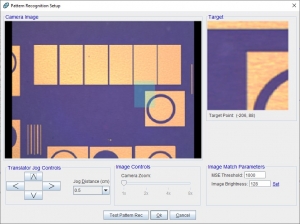 Mueller matrix measurements provide the most complete description of the dielectric response of a sample upon interaction with a light source. All J.A. Woollam ellipsometers are capable of collecting Mueller matrix data from a sample. CompleteEASE is not only the engine behind accurate data acquisition, it provides intuitive graphing and analysis tools that help you get the most out of your measurements. 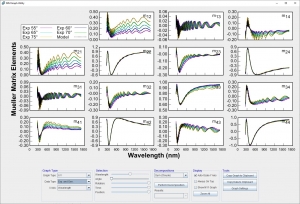 CompleteEASE is the perfect interface for real-time data acquisition, monitoring, and control. It leverages the vast in-situ spectroscopic ellipsometry experience at
J.A. Woollam within a user-friendly interface. Real-time ellipsometry data contains a wealth of information. Samples can be fully characterized before, during,
and after processing.

Ellipsometry measurements over a wide spectral range provide sensitivity to a variety of material properties such as composition, conductivity, surface conditions, etc. In addition, ellipsometry is sensitive to thickness changes at the sub-angstrom level.

Analyzing in-situ ellipsometry data is made simple in CompleteEASE. Often the best way to interpret and analyze changes observed in real-time is by using the multi-time-slice analysis mode. This approach allows users to distinguish model parameters that vary with time from other parameters which are constant as a function of
time.

CompleteEASE enables easy visualization of ellipsometry data acquired as a function of time and allows users to easily select individual time slices to view and compare.

With multiple-time slices selected, a model can be quickly developed to account for variation between measurements acquired at different times. This can include accounting for time-sensitive variations such as film thickness, temperature, or ambient environment. An example of this is atomic layer deposition of aluminum oxide. The optical properties of Al2O3 are constant during ALD growth while the thickness changes. 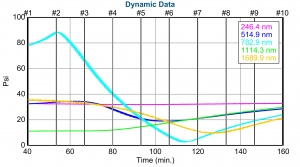 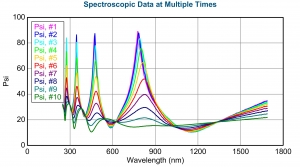 In-situ spectroscopic ellipsometry characterizes the thickness and optical properties of a sample in real-time as conditions are varied. This includes measurements during film growth or etch; while varying sample temperature, humidity, or other environmental conditions; and during other external stimulation of the sample, including magnetic, electric and others. 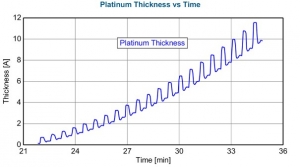 Variable temperature measurements can be very useful for a wide variety of applications. Low temperatures are valuable for optical coatings designed for use in satellite telescopes, superconductive materials, and critical point detection in semiconductors. Elevated temperatures are often used to study phase transitions in materials and to accurately determine material properties at growth temperatures. 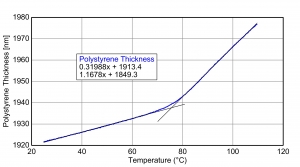